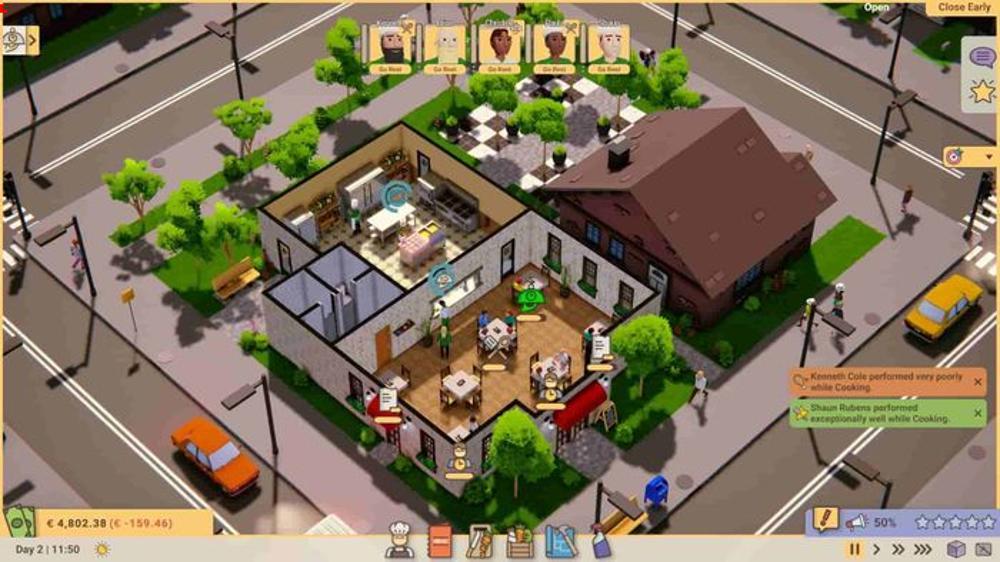 Choosing the right game to play on your PC can be a tough decision. There are so many great options out there, and it can be hard to know which one is the best fit for you. But don’t worry, we’re here to help. We’ve rounded up the best PC games you can play right now, so you can make the most of your gaming time.

From action-packed shooters to engaging RPGs, there’s something for everyone on this list. So, whether you’re looking for a new game to play during your next break or you’re just curious about what’s out there, be sure to check out our picks for the best PC games.

Recipe for Disaster is a restaurant management and social simulation game that puts you in the shoes of an inexperienced, but ambitious, head chef working towards fulfilling your lifelong dream of becoming an internationally renowned restaurateur.

Along this journey you will be tasked with carefully designing restaurants, hiring and managing the right staff, customising food menus, and experimenting with ingredients to create tasty new dishes that will impress your customers.

Blazing a trail through the highly competitive, fast-paced and stress-inducing world of the food-service industry will be anything but straightforward.

After all, this is an industry built around people, and keeping everyone happy, motivated, and fulfilled will require nothing short of a miracle!

Serious personality clashes and major skill gaps within your team could really disrupt the flow of service, whilst the volatile attitudes and peculiar tastes of your customers may prove to be the barrier that separates you from those all important positive review scores.

Sorcerer King Rivals is a turn-based strategy game for PC that allows you to lead an up and coming civilization in a magical land called Elemental.

Your village lives in the shadow of a shard of magic, and it’s up to you to use the Forge of the Overlord to craft magical items and equipment to challenge the Sorcerer King.

With eight different civilizations to play as, a rich world to explore, and a deep history to expand into, Sorcerer King Rivals is a game that offers endless replayability.

Isabella Song is a private detective and hacker who has to investigate a series of crimes in the dark and cruel world of the Song of Farca.

Can you uncover them using only gadgets, an army of drones, and your mind?

As your investigation proceeds, the stakes will rise, different episodes become woven into the one story, and decisions will become increasingly difficult.

The victim may turn out to be a criminal, and the suspect is just one link in a criminal chain.

Are you ready to commit a crime yourself to save your loved ones?

Cobra Kai: The Karate Kid Saga Continues is a beat ’em up game for PC that lets you choose between Daniel LaRusso and Johnny Lawrence.

You can play as 8 different characters, each with their own movesets, combos, and special attacks.

There are 40 different skills to master, and you can upgrade your characters’ stats as you progress.

The game also features an authentic Cobra Kai experience with the voices of William Zabka, Ralph Macchio, and other top-tier cast members.

Introducing Wildermyth PC- a character-driven, procedurally-generated tactical RPG that will have you coming back for more.

With unique heroes born in unique settings every game, you’re sure to be immersed in this one-of-a-kind experience.

Each hero brings their own organic history and personality with them, but your choices and combat skills are what decide their paths and outcomes.

All heroes die someday… but you get to hold on to your favorites.

So, ready to take on unexpected threats and strange monsters across interactive battlefields?

Unravel mysteries and share pensive moments in an ever-new fantasy setting that blends hard truths and sacrifice with humor and personal storytelling.

Minimum system requirements for PC are Windows 7+, i3 or better processor, 3 GB RAM, and Open GL 3.2.

Lacuna is a sci-fi noir adventure game that will keep you on the edge of your seat.

You play as Neil Conrad, a CDI agent, who is awoken by the news of a murder.

You must ask questions, collect evidence, and put the pieces together to find the truth.

But be careful, some questions don’t have a right answer.

Will you sell out a friend to protect your family?

Will you endanger a loved one in exchange for public safety?

Your choices matter and will determine the outcome of the story.

With multiple endings, you’ll want to play again and again to see all the different ways the story can go.

If you’re a fan of Alfred Hitchcock movies, then you’ll love the Vertigo Deluxe Edition PC.

You’ll also get wallpapers and access to the game’s development team.

If you’re looking for a game that will keep you on your toes and make you question everything you thought you knew, then look no further than Trolley Problem, Inc

This unique and challenging game is based on real-world philosophical papers, and it’s up to you to make a series of impossible choices.

With every decision you make, you’ll be pitted against The Narrator in a battle of wits.

Will you be able to outsmart them and make the right choices?

Gamedec is a cyberpunk RPG that challenges you to solve crimes in virtual worlds.

As a Gamedec, you’ll use your wits to gather evidence and make choices that will shape the world around you.

With a focus on character development and player choice, Gamedec offers a unique and engaging experience that will keep you coming back for more.

Disco Elysium – The Final Cut is the definitive edition of the groundbreaking role playing game.

You’re a detective with a unique skill system at your disposal and a whole city block to carve your path across.

Become a hero or an absolute disaster of a human being.

The top 3 reasons to play Disco Elysium – The Final Cut PC are: 1.

Play characters against each other, try to help them or fall hopelessly in love as each word is spoken to you with the appropriate accent and emotion.

Face the reality of your worldview as your political compass leads you down new paths.

Discover more citizens, a whole extra area, and monumental sights as you leave an even bigger mark on the world by chasing your dreams.

Get ready for a whole new level of intensity with Insurgency: Sandstorm Gold Edition PC.

This special edition includes the base game, as well as the Year 1 and Year 2 Passes. It also giving you access to a ton of great content.

Sequel to the indie breakout FPS Insurgency, Sandstorm is reborn, improved, expanded, and bigger in every way.

Experience the intensity of modern combat where skill is rewarded, and teamwork wins the fight.

Prepare for a hardcore depiction of combat with deadly ballistics, light attack vehicles, destructive artillery. HDR audio putting the fear back into the genre.

For the first time in an Insurgency game, customize your character to show your veterancy with diverse sets of clothing, uniforms, accessories, and character voices.